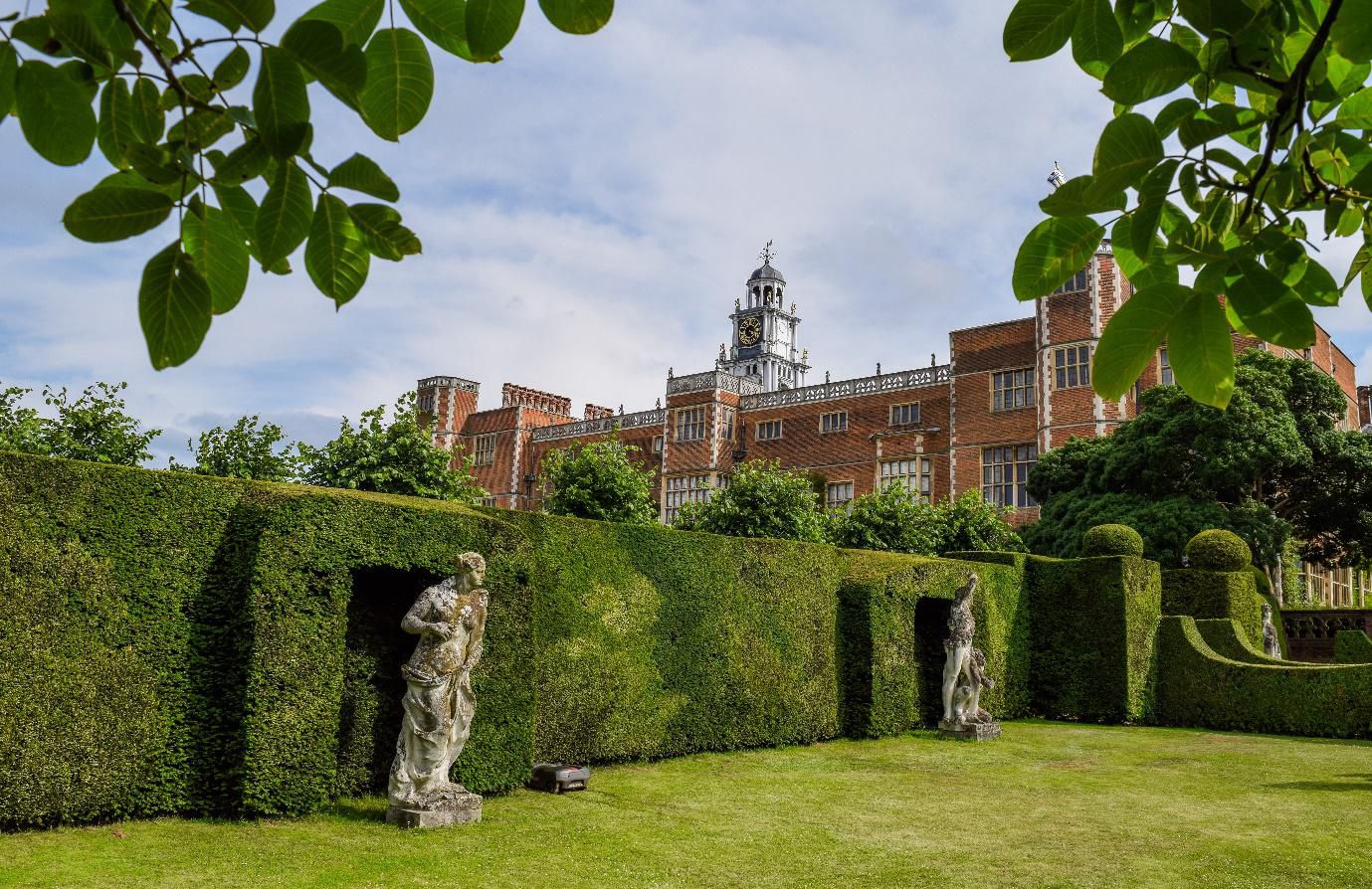 Hertfordshire is famous for its major film studios and iconic estates – producing blockbuster films and providing backdrops for period dramas. Towns up and down the county supply a range of locations for television, film, campaign-led shoots and stills – from countryside, woodland, lakes and rivers to towns, villages and market squares.

With such a rich film heritage, we outline what Hertfordshire has to offer and explore if it is the UK’s answer to Hollywood…

Rich in film heritage, the county plays host to three film studios – Elstree Studios and Sky Studios at Borehamwood and Warner Bros. at Leavesden. With further smaller studios, including ITV Studios Bovington, and a £700m investment in the build of Sunset Studios at Waltham Cross due to start next year, there’s no doubting Hertfordshire’s commitment to supporting the UK film industry.

"Having worked on a long running production based at Elstree Studios, it has become abundantly clear that Hertfordshire has a great deal to offer..."

Filming at stately homes and estates

Studios aside, Hertfordshire boasts iconic estates, no strangers to the film industry.

Hatfield House can be spotted in many feature films including Shakespeare in Love, The Favourite, Tomb Raider, Batman and more recently in 2017's Wonder Woman – the Long Gallery had the starring role for the gala as the 'Belgian chateau'. Hatfield House shares the spotlight with Knebworth House in The King’s Speech and The Crown.

Ashridge House, amid the estate’s 500 acres of land, shines in the 2012 period musical film Les Misérables and season two of Netflix’s Bridgerton. The property is a wonderful example of early Gothic Revival architecture amid parkland full of wildlife and nature – a great location for filming and photoshoots.

From The King’s Speech and 28 Days Later to The Crown and Judge John Deed, Knebworth House has graced the big and small screen for decades.

This exquisite Tudor home is encapsulated by 250 acres of parkland, with external turrets and gargoyles and internal decoration from its 500 years of history. It features large stately rooms, all individually decorated, and tree-lined pathways with kept gardens.

"Filming at Knebworth is a true delight, the location offers spectacular interior and exterior locations and the attention to detail throughout prep / filming and strike is second to none." 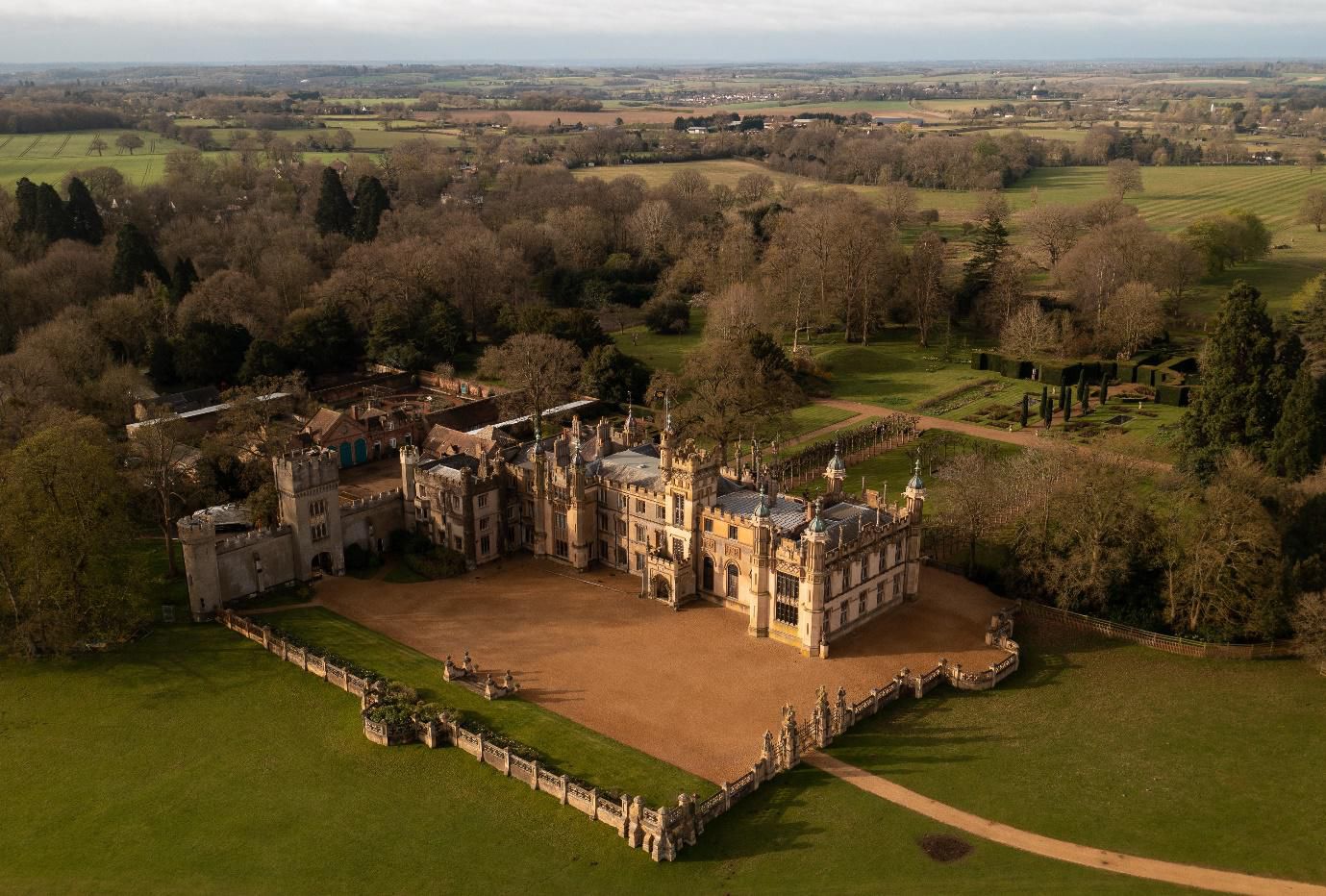 Ashridge Estate provides a green space for filming like no other – rolling hills and dense woodland with views across the surrounding area and chalk downland bordering the Chiltern Hills. Starring in feature films Harry Potter and the Goblet of Fire, Stardust and The Legend of Tarzan, it is often described as the jewel in Hertfordshire’s filming crown…

Rickmansworth Aquadrome offers access to the River Colne and the Grand Union Canal, together with miles of footpaths. The aquadrome has over 100 acres of land with wet woodlands and open lakes providing the ideal location for outdoor shoots.

Hemel Hempstead, St Albans, Stevenage, Watford and Welwyn Garden City to name a few, provide a variety of locations – all open to filming and photography. The towns feature a range of architecture, including Brutalist and Modern, as does the University of Hertfordshire at Hatfield.

Various locations in Hemel Hempstead feature in Ricky Gervais’ dark comedy Afterlife, on Netflix, including the shop The House Elliott, the green space at Gadebridge Park and café The Bakehouse – the bakers that catered for the cast and crew! Local, independent eateries and shops up and down Hemel Hempstead’s High Street are open to filming enquiries.

"We run Old Town Coffee & Cake and found the whole experience very positive - the film crew were friendly and amenable, and happy to enjoy what we had to offer. We'd be more than happy to have more filming happen along the High Street if it's all as positive an experience."

St Albans offers winding streets and a shopping centre with British charm! With 2000 years of heritage, historic buildings include the cathedral, clocktower and a fully restored courthouse (currently the Museum & Gallery). It also provides a wide variety of green space at Verulamium Park plus the remains of a Roman Theatre…

Stevenage is home to one of Britain's finest brutalist centres, both low and medium rise, dating from the 1950's. This regenerated town centre retains old town charm in and around the High Street and features a Grade II clock tower.

Stevenage also offers four lakes for water-based filming plus green and open spaces, including 120 acres at Fairlands Valley Park, set to feature in Bollywood’s feature film Nikita Roy and The Book of Darkness. 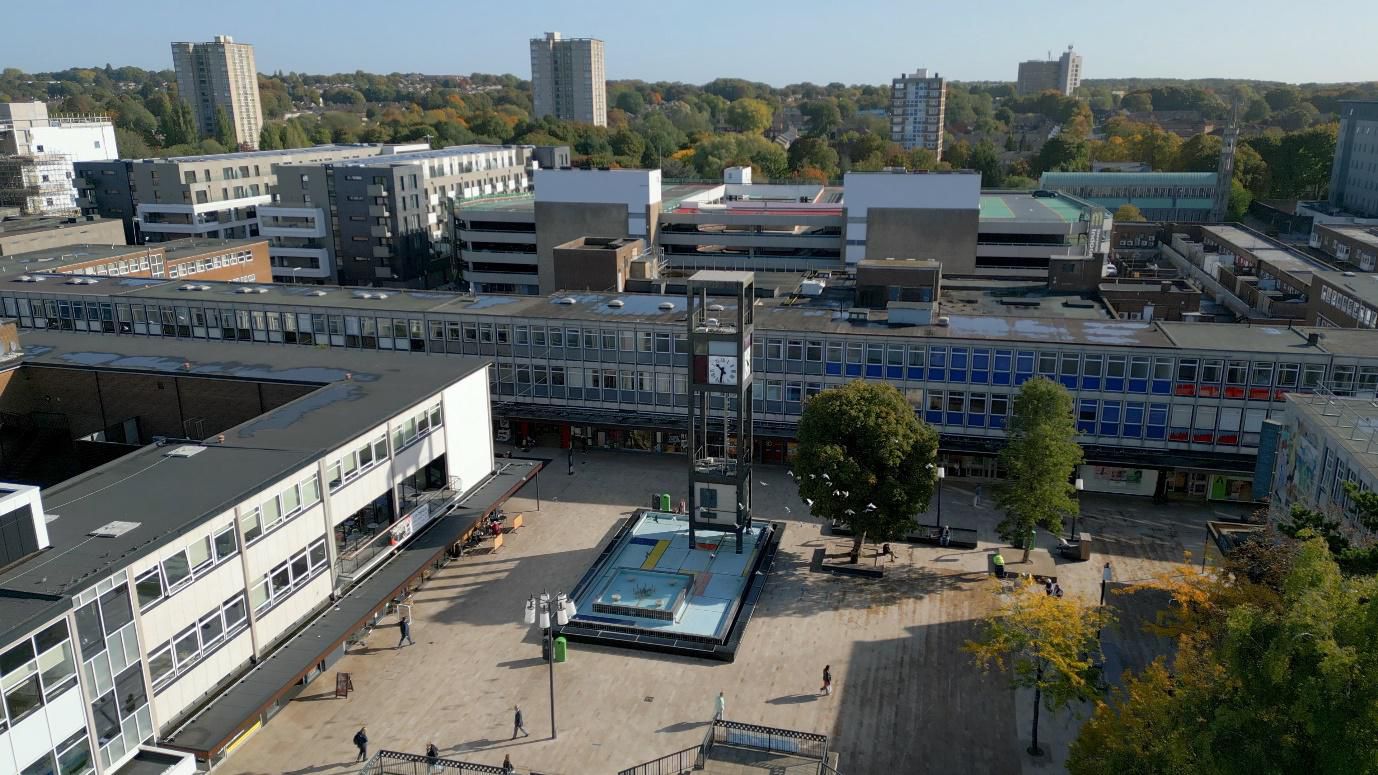 Hertfordshire also presents a number of unique locations for filming and photography, including a Grade II listed school, an art-deco styled cinema, a lavender farm, paper mill and viaduct.

Ashlyns School is a Grade II listed building and noted for its neo-Georgian architecture – it has a spacious grand hall and on-site chapel. It provides long corridors and multiple classrooms of various sizes and serves for modern day filming with a new sports hall.

The school has featured in several film and television productions including Netflix’s The Crown and the BBC’s Call The Midwife.

Hertfordshire’s art deco masterpiece sits in the centre of Letchworth Garden City. This unique cinema is the perfect filming location to capture the 1930's! While modern and recently renovated, it showcases its art deco architecture with windows to the lobby interior preserved from the period.

This historic, working paper mill, rich in history and traditions, is open to filming and photography. It offers lofty industrial spaces, working, heavy paper machinery and rustic settings, with original features throughout.

Digswell Viaduct lies 100ft above Hertfordshire’s countryside. Situated outside Welwyn Garden City the 475m elevated bridge features 40 arches at 9m each! It provides for a dramatic drone shot with grassland below, making for a true contrast. 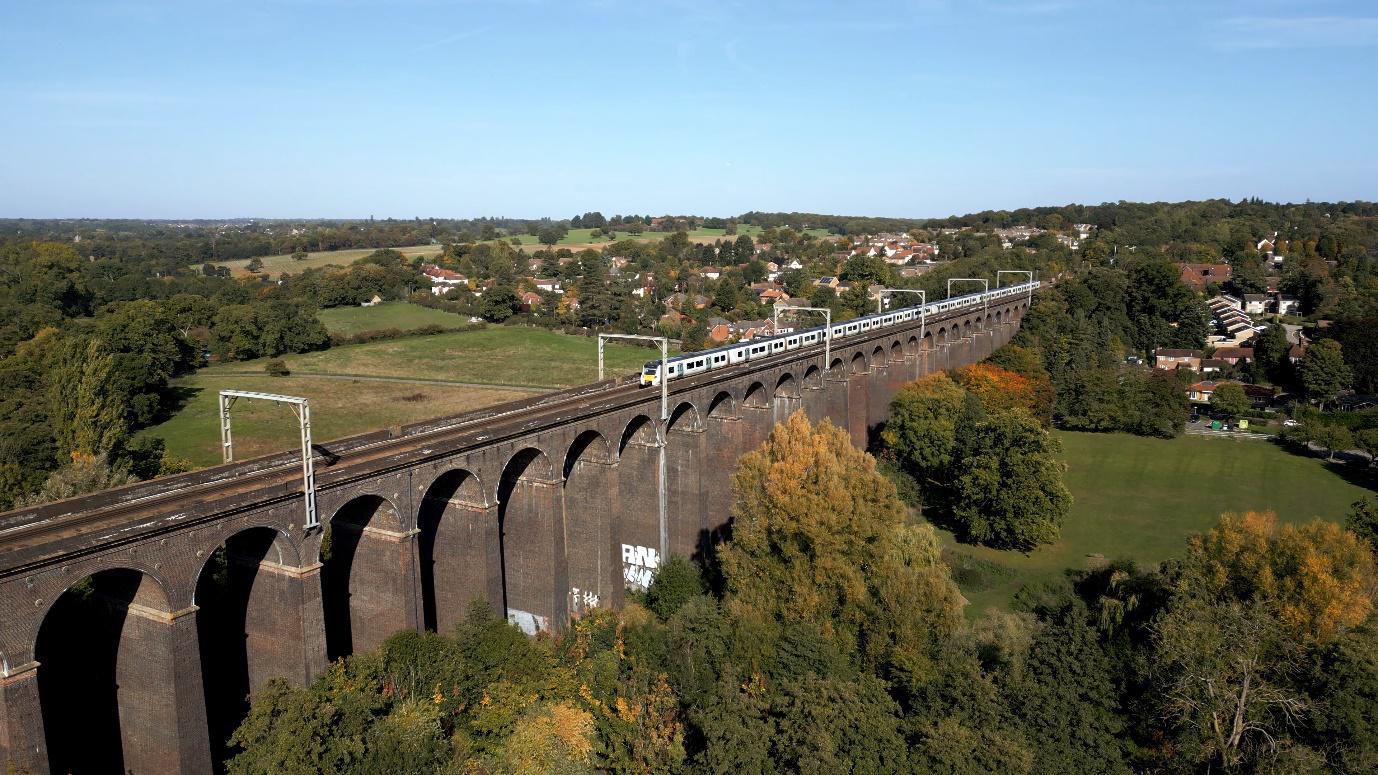 Other filming locations – in demand

Hertfordshire has abandoned and derelict properties available for filming and photoshoots, together with empty warehouses, hangars and large spaces - always popular and in demand. There are also long, country roads up and down the county for drone filming, aerial photography and car motion shoots.

Hertfordshire is committed to and invested in supporting the UK film industry now and in the future.

To support Hertfordshire’s film-friendly offering, through the UK Government Community Renewal Funded project Herts, Camera, Action!, Visit Hertfordshire has produced a dedicated directory of contacts for filmmakers and photographers looking to shoot in the area. It provides location managers with details of film-friendly accommodation suitable for cast and crew.

Hertfordshire has a strong supply chain used to working with the film industry and a hub of creative freelancers in the area, many homegrown at the leading School of Creative Arts at the University of Hertfordshire. Furthermore, The Elstree Screen Arts Academy, a university technical college located in Borehamwood, equips students with the creative skills they need to excel in the culture industry, including TV and Film.

Visit Hertfordshire has also created a filmmakers’ planning map to help streamline the logistical process by providing key film locations and their proximity to the filming studios in and around Hertfordshire, together with accommodation for cast and crew, as per the directory.

Is Hertfordshire the UK's answer to Hollywood?

Hertfordshire is one of the film-friendliest areas in the UK offering location managers a wealth of choice and support. There’s a plethora of council properties, public spaces and local businesses across the county open to filming and photography. With multiple major film studios and iconic stately homes providing period locations, Hertfordshire is a go-to destination for filmmakers – and a dream for the film industry.

Want to film in Hertfordshire?

It's easy to arrange any shoot in Hertfordshire - booking is quick and easy from point of enquiry to confirmation. If you are looking for something specific, complete our filming enquiry form and we will do the searching for you. Otherwise, please complete our film permit application form and we'll get back to you asap.